Posted on December 21, 2016 by mrsmurfinscountrylife

It is only 4 more sleeps until Christmas! Who is getting excited?

One of the things I still have to do is wrap the stocking presents. Over the years I have been surprised at how different families do the stocking thing. Of course as a kid you think that everyone has the same traditions.

In our house we didn’t hang our stocking by the chimney with care  they just turned up Christmas morning on the end of the bed filled with goodies. I used the be amazed at all the stuff in there. I still have my childhood stocking and I am amazed at how small it is. Maybe it was magic, but I always thought it was a mountain of goodies. And in the toe was a mandarin orange.

We opened the stockings in bed and one of the gifts was always a chocolate letter. This is a Dutch tradition that we adopted in our family likely because there are a lot of Dutch families in the area and well it is a good policy to adopt all traditions that include chocolate. 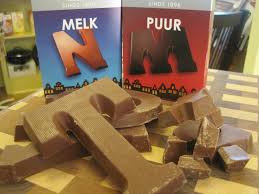 Somewhere along the line a magazine was included in there as well. This gave you something to read as you munched your chocolate letter waiting until it was late enough to hit the living room for the tree presents.

I still like getting a magazine and I look forward to taking a break sometime during the day and having a few quiet minutes flipping pages.

The rest of our presents were usually little things, socks, notebooks, toiletries and more chocolate. they were always wrapped which is what I should be doing right now.

I followed those same traditions with my own kids. Now that they are grown we tend to open the stockings around the breakfast table while having a juice or tea before moving on to the bigger tree presents. I love it when I see the whole family with their noses in the magazines and reaching for another chocolate.

Some families pass on the stockings and have moved on to Santa sacs that does allow for some bulkier gifts. I have to admit I get carried away and sometimes have to have an overflow bag for the things that won’t fit in. Or rather Santa gets carried away….